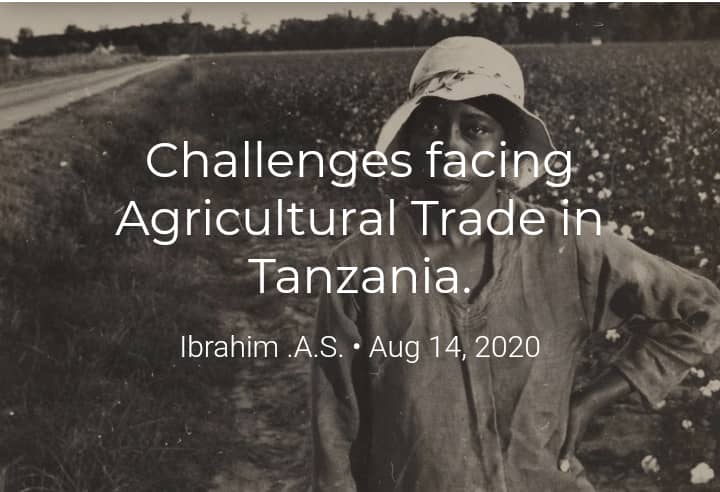 When you think of trading in agriculture there are some issues that traders have to work on before committing into a trade deal. These issues can also be regarded as challenges and if not sorted early in the beginning may lead to loss of credibility.

Here are some of the challenges in the Tanzania's Industry that we need to pay attention to, especially when you are new in the "agriculture produce trading eco-system"

Most farming done in Tanzania is Subsistence farming thus most of the produce is for consumption and not surplus for trade. Farmers that are trying to produce surplus are limited by capital which lead to a lot of individuals conducting trade in isolation from different regions.

Most traders will claim they have years of experience in trading in which the claim might be very true.

However, the real concern is; (1) do they have the right experience (2) are they organised to mitigate risks so as to complete the trade (3) Are they well informed of the policies put in place by the government and (4) Most important are the values of the people you are working with align with fulfilling the order required in a timely manner and not just creating short run and unsustainable profits.

While the goal in trade is to make money, risk assessed in the process that will be followed is equally important to ensure there is no bottleneck that will either lead to loss or lack of repeat sales.

Lack of means to support the terms of payment put forward by a client.

When you are starting out in agriculture export you will most probably encounter a discussion on the terms of payment with your client. If its a new client, they mostly request for a letter of credit (LC) which is a process where payments are going to be facilitated by the bank. The banks of both parties act guarantors of the parties engaged in trade taking into consideration all the agreements in terms of delivery (either FOB or CIF).

On such a scenario, it is very important for traders to understand the capacity that they are about to trade and be open with the client on their financial capacity so that renegotiation take place in case the supply is readily available rather than going forward and comprising the standard quality of the operation that may lead to delays and losses.

Having spent some time in agricultural trade operation i have come to realize that there are people in the agricultural trade industry are not specific to certain crops as they deal in almost everything and also being run a bit informal. This added with organization leads to poor financial management. For example you can find some of the merchants using money for "Operation A" on "Operation B". Not even having to properly assess what operation B needs they soon find themselves running into a loss and sometimes default.

This does not only weaken a Traders credibility in business but if its a recurring theme at the national level it weakens the capacity of the country to trade with other countries.

I understand that capital might be a hindrance in moving traders into growing their trade business. But i also believe in if a trader has integrity, proper organisation to ensure the right trading process that minimizes risk to a mission, plenty of foreign buyers are willing to put in funds in the right process. Thus Trust, integrity and transparency is a must through out the process.

Moreover the government is doing a great job to put in policies to support the country's trade by putting up warehouses that enables easy collection and trade. However, am afraid that the policy might not be friendly to all actors on the ground especially a young trader who is looking forward to grow his or her business. There was already a trading Eco-system that existed and the new policy has discriminated some of the actors which has led to some effects on the ground. I believe there is a room for improvement so that the policies reflect continuity and change as part of change management but i will leave the discussion for another day.

I seek to give an insight on how Agricultural trade is conducted and what should be done to improve with the hope to steer a discussion on what to continue and what to change to define the industry. #www.kilimosa.com #ChangeHowBusinessIsDoneChangetheWorld #PolicyAdvocacy #Agriculture #Trade